From out the humming window, Una can see the nearing lights of Charlotte, and she thinks about how from above cities tend to resemble circuit boards.  Every little house a tiny resistor or metal pin, connected by ribbons of road to clusters of input and output defined by darkness.  With a sigh, she closes her eyes and prays to a God she only occasionally believes in for the plane not to implode upon touchdown.  It’s a silly ritual, considering how often she travels, but one that makes her feel a little better nonetheless.  Her deep dislike of traveling was the main reason this had been her first vacation in six years of work.  Even as a child she hated the moments before landing, when the air in her stomach seemed to suddenly rise and hold itself still against her bladder until the rough bounce of the plane’s wheels against tarmac. The plane lands without incident, and a few people clap for the pilot while someone in the back half-heartedly retches.

“What are you thinking about?”

The last time she had been in the Charlotte airport, she had been nineteen and shiny, on her way to visit her first girlfriend during the summer break.  She bought the ticket with her own money, earned scooping ice cream and answering phones at her two part-time jobs.  She and her girlfriend, Sam, had already broken up twice in the past year.  Both times, Sam came back to her, eyes glistening and voice shaking as she apologized, so Una took her back.  Una didn’t really believe that Sam wouldn’t cheat again, but what mattered most to her was Sam’s acknowledgment of Una’s hurt.

In the belly of the airport, Una waits in line to order fried chicken at a fast food kiosk.  Looking around, she sees a pair of twin boys at front begging their harried father for one of the face-sized cookies next to the register.  Their father points to the heaps of chicken and cornbread on their plates, yelling “Isn’t this good enough?” loudly enough to make the cashier jump.  The twins start to bawl, and two middle-aged ladies also in line clucked quietly under their breath.  Una orders the 3-piece set with mashed potatoes and fried okra, spicy and dark meat only, please, thank you, and keep the change.

“Was your trip okay? You had two flights, right?”

They stayed together another year and a half, and this time Sam was open with Una about dating other people. It was better they both agreed, because Sam wanted to be with Una but didn’t want to hurt her.  Una, quite honestly, didn’t care as long as she was the one Sam came home to.  Sam could fuck who she wanted, but Una felt a secret pride that at the end of the day, she was the one sleeping next to Sam, and that it was she who got to wake up to “Hello, Bluebird,” while Sam stroked her fading violet locks.

“Yeah.  My layover was in Charlotte.  Nice airport.”

She waits in the grey waiting room outside of her gate, listening to her flight becoming delayed one, two, three times.  To pass the hours, she plays on her Nintendo, ignoring the three children who pass by whispering “Mommy, why can’t I have a DS like her?” The reason, she thinks in response, is because she makes her own money and is no longer a parasite living off of her parents. Buying your own video games is one of the few consolations of adulthood.

What she hadn’t expected was that one of Sam’s flings could stick. But Darcy didn’t just stick, she consumed both Sam and Una, as Sam came home one day to say she was marrying Darcy, and Una’s heart was left dark and brittle, like charcoal.  That night Sam slept at Darcy’s, and Una drank two bottles of Moscato while she packed up Sam’s things and left them in boxes by the street. She had planned to light them on fire, and send Sam a text saying “From these ashes your new marriage will be born,” but standing on the sidewalk with gasoline soaking her slippers, she just crouched down and started to cry.  The next day, she packed up her own belongings and drove from Ithaca to New York, leaving behind only a note taped to the door that said “I’m taking the dog. Bitch.”

Una finally boards her next flight, and leans herself against the curved wall of the plane to try and sleep a few hours.  Her flight gets into New York at 3:42 in the morning, but even though it will be Sunday, she doesn’t want to sleep past noon.  That’s when she goes grocery shopping, because the stores are wonderfully empty, everyone still stupefied at home or in their cars from Sunday brunch. She can take her time, ordering a few extra slices of pastrami from the deli, letting the dairy aisle cool her while she considers different brands of cheese.  She enjoys weighing her fruit in her little hands, piece by piece, so that she can probe the cool skins of apples and plums for imperfections more carefully. As she sinks into sleep, she starts to dream about eating her first cool plum of the summer, and the burst of sweetness that follows that satisfying pop of tart purple flesh. She doesn’t notice when the man next to her accidentally spills a little of his tomato juice on her.  She is dreaming.

For two months she lived on her mother’s sofa until she found a respectable software developer position, and for the next few years she focused on work, video games, and her dog, Agent Morgan.  She occasionally went out with her colleagues, but the conversation would inevitably come to “Hey, why don’t I set you up, Una? I got a few lesbian friends I bet you’d like one of them.”  At this point, she generally lied that she had just recently been on a few promising dates, so she was good, thanks.  She was happy with how crisp her life was without romantic entanglements; coming home to Agent Morgan’s soft licks and her herb garden felt well-earned after years of tumult with Sam.

“How is that going?”

When she emerges in Midtown, her duffel bag’s strap has cut into her shoulder and she winces the entire time she staggers home.  She purposely told the cabbie to drop her off a few blocks away from her building, because she doesn’t like the idea of a stranger knowing where she lives.  For the past two hours she’s been running on memory, getting off the plane, making idle conversation in the car, the excitement of coming home keeping her awake.

Six years after she first moved to the city, Una ran into Sam at the deli, Sam having moved there recently to pursue her childhood dream of making it on Broadway.  Sam touched Una’s shoulder, and softly murmured “We should get coffee some time.”  Una remembered hearing from a mutual friend some months earlier that apparently Sam and Darcy’s marriage had dissolved in the past year, and Sam was filing for divorce.  Una slipped out from Sam’s touch, and told her what she had dreamed of saying for years: there’s nothing for her to come home to, not anymore.  Those ashes had flown.

On the corner of Lexington and East 43rd, in the peppery sunlight just starting to come through, she finds a baby bluebird.  It must’ve fallen out of its nest, she thinks.  Without a thought, she lifts her foot to crush it, but suddenly, unexpectedly, she feels guilty, and leaves the bird alone.

That day, when Una returned from the deli, she sat on the cool tile of her kitchen, holding a jar of blackberry preserve while Agent Morgan sniffed around the grocery bags.  She felt sick in her blood, like there was smoke in the plasma clouding her from the inside out.  She needed some kind of change, something new to dispel Sam’s phantom.  So she went home, taking a week’s worth of vacation time, to the crumbling white house on the Georgia coast where her grandmother still lived.  This was what had been left behind, as Sam chipped away the other pieces of her, what Una had coveted and refused to reveal.  Watching the silty shoreline from below her window, she thought to herself that this is where she can become. 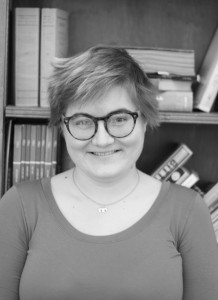 Teddy Clegg is an English and Computer Science major who, after graduating in 2016, plans to begin her new adventure of moving to California’s Bay Area. At Mount Holyoke, she is the conductor of the Mount Holyoke College English Handbell Ensemble, and, in her free time, enjoys reading and playing video games. Her favorite author is Haruki Murakami, and her favorite game series is Dragon Age.
Teddy served as the Web Editor for the 2016 Blackstick Review.