This WordPress was created as a final project in Professor Bettina Bergmann's Art History 290 at Mount Holyoke College in fall of 2015. The pages under "Background Information" contain a brief overview of what relics are, why we study relics, and how religious importance makes relics more complicated than other artifacts. The posts, found on the homepage, are examples of different relics and how the world understands them. 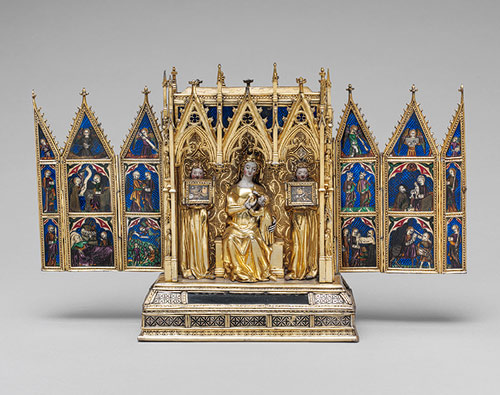 In the study of religion, relics are objects that connect modern worshippers to their past. Relics traditionally refer to human remains of saints or holy figures in religions ranging from Christianity to Buddhism. More broadly, relics can also describe any sort of artifact with great religious meaning, such as collections of holy texts or prayers. To those who practice the religion, relics are not simply objects from the past but artifacts that represent history for an entire group of believers.

Relics have a sacred status among believers. They cannot be treated like other historical artifacts because they transcend the earthly realm. This added component of holiness complicates matters of ownership, meaning, and purpose that those artifacts serve.

Modern museums rarely display relics. Their complicated histories, full of lies, deceit, stealing, and fakes causes too much trouble. Instead, there is an increased interest in reliquaries. Reliquaries are containers for relics, often beautiful and ornate. Even the Mount Holyoke Art Museum has the “roof” from a French 13th century reliquary. The reliquary, not the relics themselves, are considered art.

Relics, still powerful symbols of the past of religious communities, are at extremely high risk of being sold on the black market. In Catholic Churches, if a parish closes down, then any relics that church may have housed easily end up on the black market. As is the case since the early Middle Ages, fakes are a perennial problem within relic communities. The internet has made relics selling much easier. eBay is an easy source to find scores of relics, from clothes of saints to splinters from the cross Jesus Christ was crucified on.

“For All the Saints” is a community of people using the Internet to identify and reduce the numbers of fake relics being sold on the web (For All the Saints). The following little story is how they introduce the strangeness of relics.

As the story goes, a priest assigned to a poor parish in a poverty stricken mountain community of northern Italy was approached by the town council. The council wanted to improve the lives of the population by bringing in tourist dollars. However, the town had nothing to attract outsiders to the community for a visit. They thought that, perhaps, the good father could obtain the relics of a major saint to place in the church that would bring visitors who would spend their money in local restaurants and hotels.

The priest agreed to give it a try and set off for Rome. After days of visiting church after church he was approached by a rather swarthy looking character who ask the father if he was searching for relics.

The priest responded, “Yes, my son, I am looking for the relics of an important saint to take back to my village but have found nothing. Tonight I must return home empty handed.”

“Father, this is your lucky day!” responded the man. “It just so happens that I have recently acquired the head of Saint John the Baptist and for a moderate sum, to cover my expenses, the head is yours.”

“But my good man, isn’t the head of John the Baptist held at the church of San Silvestro here in Rome?” inquired the priest.

Relics cannot be treated like other artifacts. Without the religious meaning behind relics, questions of ownership and importance would be clearer. When something is proven real, like the Iraqi Jewish Archive, the religious importance influences who owns the archive. When something is possibly proven a fake, like the relics of Saint Rosalia, the faith in those artifacts possibly makes questions of authenticity irrelevant. And when something came to be in its current location through lies and tricks, the connection of that city to its patron saint, like Saint Mark in Venice, makes questions of history or repatriation mean nothing.