When the two civilizations first met, there was no written Japanese language. So the Japanese adopted the Chinese script and acquired information on China from Chinese emissaries in order to make communication between the empires possible. Although over the centuries, both cultures have developed their styles of writing to be relatively unique, there are still a lot of similarities in the characters that can be traced back to Chinese linguistic influence on Japan.

For example, Kanji in the modern Japanese writing system has much in common with modern Chinese characters (hànzì).

To trace back, Chinese characters first came to Japan on official seals, letters, swords, coins, and other decorative items imported from China. The earliest known instance was the King of Na gold seal given by Emperor Guangwu of Han Dynasty to a Yamato emissary in 57 AD.

Besides the gold seal, Chinese coins from the first century AD have been found in Yayoi-period archaeological sites. However, Japanese would not have comprehension of the script and be literate until Chinese envoys came to spread knowledge on Chinese culture. According to The Chronicles of Japan and Records of Ancient Matters, a semi-legendary scholar called Wani was dispatched to Japan during the reign of Emperor Ōjin, the 15th emperor of Japan, in the early fifth century, bringing with him knowledge of Confucianism and Chinese characters.

The practice of building elaborate temples came along the arrival of Buddhism in Japan. With that development, other buildings began to take on more complex forms with larger rooms and inner courtyards. The classic curved roof style definitely came from Chinese influence, and it is still seen throughout Japan today.

The ancient Chinese approach to city planning involved the use of organizing city roadways in regular rectangles for easier navigation and communication.  This concept was put into use in Japanese cities like Kyoto and Nara. Even fields and irrigation systems started to use this organized and efficient system.

Ramen — noodles made of wheat flour, eggs, and kansui in a soup broth with various toppings — was brought to Japan from China around 1910. Soon afterwards, the first Japanese ramen flavored withshoyu (soy sauce) was introduced in the Asakusa area of Tokyo. Ramen in Japan has since evolved in a variety of ways at different times and in different places, to become one of Japan and China’s most well-loved foods. 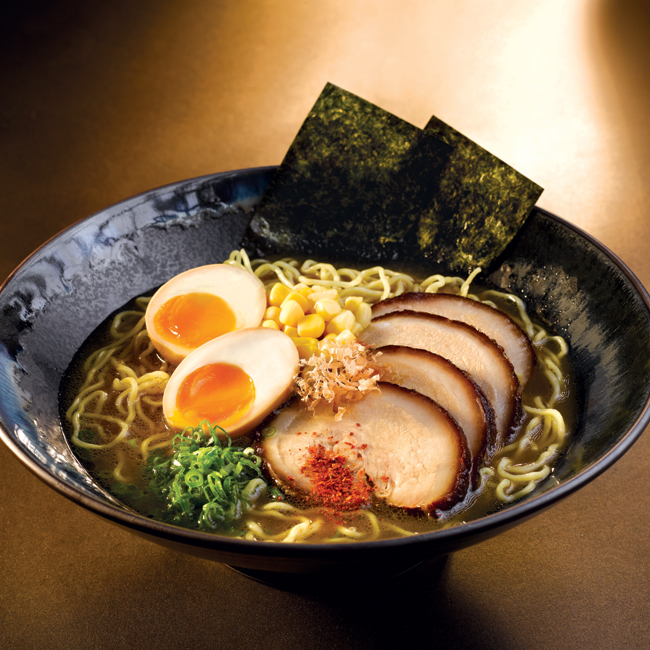 Tokyo is now home to many conceivable types of ramen. They include noodles served in the standard regional broth flavors of shoyu, miso (soybean paste), and tonkotsu (pork bone), as well as variations such as cold noodles served with dipping sauce (called tsukemen) and mazesoba, literally “mixed noodles.”

Wagashi are traditional Japanese cakes known also as “art of the five senses.” With their beautiful design, delicate sweetness and pleasant taste, they offer people layer-upon-layer of enjoyment. Each little cake sets a seasonal scene – fish swimming in a clear stream; an atrium of stars shining in the night sky; a sunlit shore and so on. While the skill of wagashi craftsmen has been handed down throughout the ages and is much cherished, wagashi have also risen to provide examples of new challenges, undaunted by changing eras and preferences. Combining techniques and ingredients from Western cake-making has proved a breath of fresh air in the creation of new wagashi and inspired further development of the craft.

Japanese national clothing,  Kimono, was majorly inspired by Chinese clothing. Vigorous trade between Japan and its continental neighbors brought in Chinese dresses and styles into Japan during the Han Dynasty. The Tang styles and Sui dynasty from China influenced clothing in Japan while it was developing from a collection of loose clans to an Empire. All robes in Japan were to be worn from left to right just like the Chinese. Right to left was considered barbaric in China and the ‘left over right’ became the conventional rule of wearing a Kimono ever since. During the Heian period (894 specifically), the Heian court was taken to sensitivity of art and subtle beauty and wardrobe became much more detailed. Though as time progressed, colors, combinations and fabric textures changed and separated themselves from Chinese influence, it cannot be denied that Japan inherited much from Chinese style of clothing and interactions between the two nations played an important role.

Japanese anime, a movie or episode that utilizes an animated cartoon art style to convey a story, has become a growing trend since 1920s in both China and Japan. Unlike western cartoons, anime frequently tends to have more detailed character design. This can be used to allow for a better connection between the viewer and the character. Osamu Tezuka, known as the “manga no kamisama” (meaning “God of Comics”), began his forty-year evolution of animation, which changed the content of Japanese comic books. With the creation of his first animated character Astroboy that was unlike any other animated character; he appealed to the Japanese public with a robotic boy deeply. Director of films, Hayao Miyazaki, created more masterpieces like the Oscar winning Spirited Away (released 2001) and led unprecedented impact of Japanese anime across Asia.