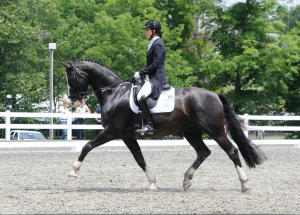 Originally from Germany, Jutta Lee began riding at age 10 in a local riding school program where her first instructor was a German cavalry officer. As usual in Germany, Jutta and other riding school students received a very versatile equestrian education which includes not only dressage, but also elements of jumping, cross country, vaulting, and fox hunting, which gives them a broad foundation for the rest of their riding careers. In her early teenage years, Jutta was given the opportunity to ride a fantastic dressage horse, which she claims is what got her “hooked” on the sport. After graduating from high school, Jutta apprenticed at a dressage facility where she helped train a wide variety of horses– from green dressage prospects to Grand Prix champions. Before moving to the United States in 2009, Jutta trained with some of the best dressage riders in Germany and Austria, including Christoph Hess and Arthur Kottas Huldenberg, the Oberbereiter (head chief rider) of the Spanish Riding School in Vienna. Since moving to the United States, Jutta began managing her own training facility in Vermont and quickly earned her USDF Bronze, Silver, and Gold medals within five years on horses she trained herself. With her current Grand Prix mount, Glorious Feeling, Jutta won the small tour of the CDI in Saugerties in 2012. She has also won several year end awards from the New England Dressage Association, as well as participating in their symposiums in front of clinicians from all over the world. Several of her students have earned their Bronze or Silver medals under her instruction.  In addition to her extensive dressage background, Jutta also holds the German equivalent of a Master’s degree in dentistry. As a dental technician, she has previously operated her own lab where she trained her own students to become dental technicians themselves. Jutta is known for not only her superb riding abilities, but also for the classical and correct way she trains her horses and students. We are so grateful to have her as our head dressage coach at Mount Holyoke.