The House of the Golden Bracelet

The North wall is host to the most well-known bird depictions at the House of the Golden Bracelet. The species of bird on this wall, along with the other wall of this room, are exceptionally detailed, and therefore well identified. As such, the plausibility of this scene, inclusive of both birds and foliage, has already been examined and determined false.

Examining the plausibility of bird species alone, we will start at the center-outward. The magpie was “an abundant resident of the open countryside.”1 It would have therefore been found frequently in gardens throughout the year.2 Wood Pigeons and Rockdoves, similarly, would have been a common visitor of the villa garden throughout the year, though with higher frequency and present in larger numbers during the Summer.3 The turtledove, too, would be present in large numbers during the Summer, though almost absent in colder months.4

House sparrows, perhaps originally native to the Fertile Crescent, had become an annual bird in the Roman empire.5 It is noted by Jashemski that the coloration of the house sparrow on the Italian peninsula may be due to “hybridization with the migratory Spanish sparrow,” further highlighting their permanent status in the south of Italy.6

Golden Orioles or the chlorion were not seen in winter with the exception of the solstice; however, they present on the Roman countryside in Spring, Summer, and Autumn.7 And yet, their presence in the garden may have been rare, if structures were placed in a way to dissuade these birds from consuming the garden’s fruit, as the Oriole’s Greek name translates to “fig eater.”8 Though it was very possible that these animals still frequented gardens in the Summer, its placement within numerous garden scenes is most likely due to the vibrancy of its golden-yellow plumage.9 A barn swallow would have been another common migrator of Europe in the Summer, and therefore would present themselves en-mass along their course through Europe.10

One possible discrepancy with this mural is the blue rock thrush, which was likely to live “on rocks and tiled roofs.”11 This bird today lives in rocky habitats across the coasts of southern Europe. And yet, during the Summer, the blue rock thrush can fly to forests and “open country” in the South of Italy.12 But it has also been suggested that the rare depiction of these birds in murals may be due to this birds more recent introduction to the southern-ecosystem, after the fall of the Republic.13 And still, these birds may have been a common caged “pleasure” bird, released into the villa garden by the owner. Unfortunately, there is no proof that the family from the House of the Golden Bracelet owned caged birds.14 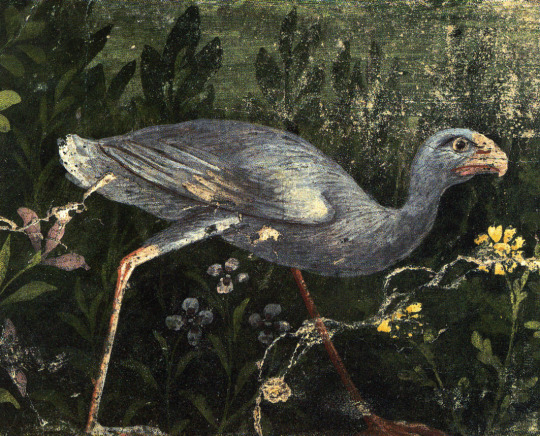 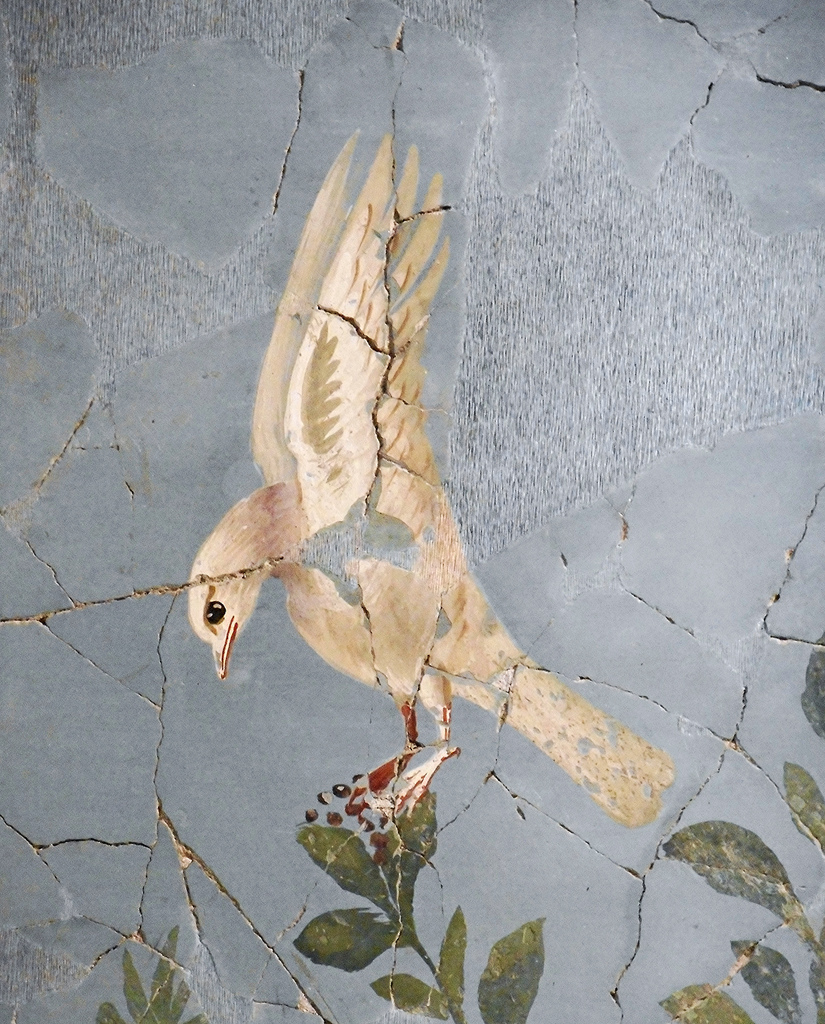 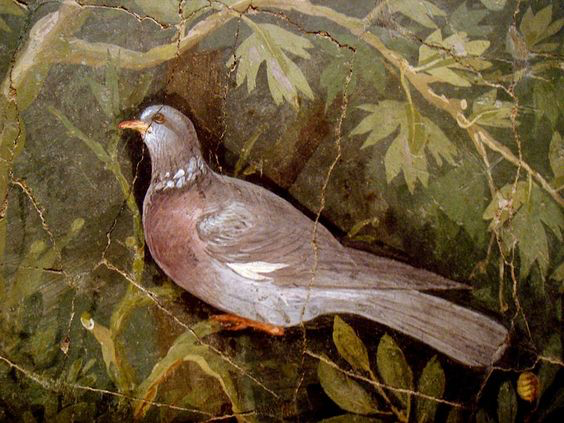 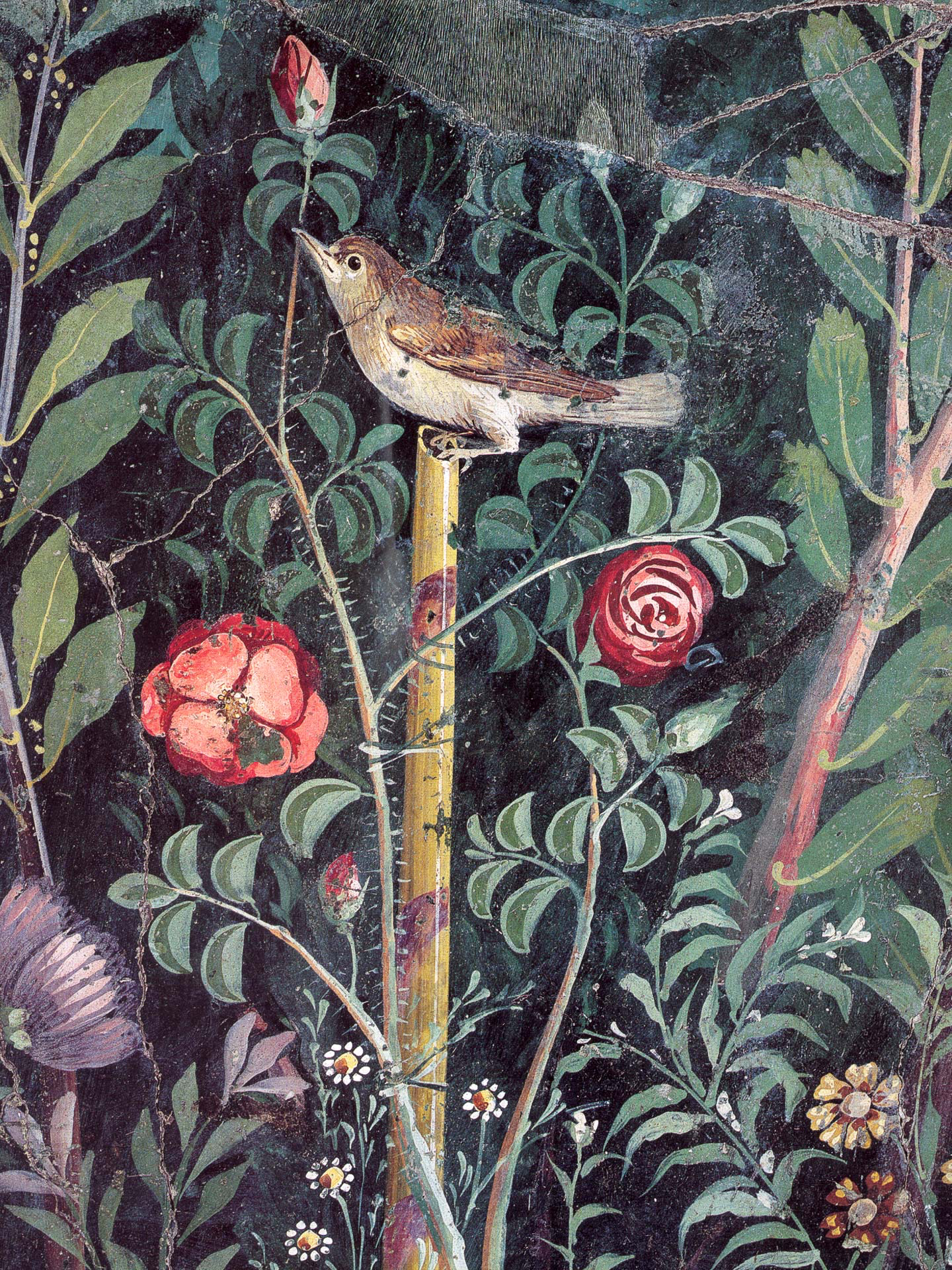 Nightingale
The nightingale is a Summer migratory bird species of Europe, residing mostly in deciduous woods. However, Jashemski speculates that it’s rarity in paintings is because it was not a colorful bird, and that it was hard to come upon in the wild due to its camouflage (Jashemski 384). Nevertheless, it is likely to have been kept as a caged bird for its song.

Though most bird species depicted maintain similar migratory patterns, and are expected to have congregated in the Roman coast during the Summer, differences in environmental-preferences would have determined the resident-time-stay of each bird within the Roman garden. Birds that preferred to reside in forests or mountains would perhaps frequent Roman gardens less than birds with a preference for open land and small plants planted in the garden. However, arguments for increased plausibility of these scenes reside in the extent of bird keeping that was practiced in each villa. Though no examples of Roman bird cages exist today,15 the described materials and craftsmanship used point to an interest by elites in keeping specific pleasure birds in this way.16 And these birds, under the consideration of Varro’s claim that birds are innately wild, would have “frequented the Roman garden.”17

In this second scene on the East wall, the purple gallinule is pictured next to a partridge or quail. The purple gallinule was a popular bird to display in wall paintings.18 This bird is native to swamps and wetlands in southern Spain, Sardinia, Sicily, Morocco, Tunisia, the Nile of Egypt, and the Middle East.19 And yet, it is understood that this bird was additionally spread throughout Italy, Greece, and Turkey in the last two centuries, and was known to inhabit Campania.20 Furthermore, as most depictions of this bird are of a similar stance, it is believed that frescos were based on related model notebooks” by artists,21 perhaps because these birds were shy and therefore difficult to maintain domestically.22 Still, it is possible that these birds could be kept in pleasure aviaries and therefore released into the villa garden.

Next to it, both the partridge and the quail were common, annual, profit birds that could easily be caught in the “rugged mountainous terrain,” hiding in low-foliage.23

Another possible bird existing within this painting is the ringed dove, which possibly originated from North African and would have most likely only existed in the Roman Empire in aviaries, collected as pleasure birds, for their call.24

Song thrush were described by Pliny as being speckled around the neck during the summer, and without in the Summer. Thrush, in general, breed in the Summer in the north of Italy, and after which they retire to the south in Autumn and Winter.25 Therefore, it seems unrealistic that a song thrust would exist in the south during the Summer unless previously bred in an aviary and withheld from migration, or kept in bird cages as song birds, and again, released into the garden frequently.