Tearing a hand through her tousled curls, Harper stared into the mirror that hung above her bathroom sink, unsatisfied, as always, with what stood in front of her. Jet-black eyeliner was smudged along her waterline, while her lips were painted a vampy red, and a peachy blush was dusted onto her cheeks. Maybe dusted wasn’t the right word, since it looked like she had slathered Kool-Aid powder over her cheeks.

“You look like a raccoon,” her mother, Laurie, would say, whenever Harper was slipping on her shoes, about to make her escape. “I don’t know why you think you look good like this. You’re naturally so beautiful and then you do this to your face. Why? Haven’t you ever heard the expression less is more?”

Harper wasn’t talented, but she had two talents. The first was that she could fold her tongue into a four-leaf clover. People always wore pinched expressions, followed by a few squeamish noises and “Oh my God. Put your tongue away.”

Her second talent was that she had selective hearing, which worked in her favor at times like these. Harper knew her mother had good intentions, but she also knew that she was someone who had to make her own mistakes in order to learn. She was headstrong, just like her father. Harper hoped that was the only trait she picked up from the man who abandoned her when she was six.

Her father’s leaving, though, didn’t stunt Harper. She never pitied herself for not having a father. If anything, she was grateful that he left before she became too attached. She had her mother and her sister, Nora. But now she only had her mother.

Nora wasn’t dead, but the moment she turned eighteen and escaped through her bedroom window with her cliché boyfriend who thought he would become a big-time drummer one day, Harper declared her dead. It wasn’t because Nora had left Harper. It was because Harper had to be the one to watch her mother cry herself to sleep for weeks, question herself as a mother, donate Nora’s clothes to charity. She had no choice but to stand at the sidelines, paralyzed, as she watched her mother break in front of her.

Four months had passed and still her mother hadn’t recovered, spending most nights bottled up in her room with her bare face revealing prominent dark circles.

The unconditional love a mother has for her child was something Harper could never quite understand.

Tapping lightly on her mother’s bedroom door with her knuckles, Harper pushed open the door, popping her head inside. “Hey, Mom, I’m going out and I’ll be back soon. Okay?”

“Okay,” Laurie said, her eyes glued on the television, while her hand sat inside a bowl of cashews. She never gave Harper a second glance, not bothering to add in a snide remark that Harper so-desperately craved at the moment.

Harper lingered, her hand resting on the doorknob.

“No later than midnight or else you’re grounded. Is that clear?” her mother used to say with her eyebrows raised.

Harper couldn’t remember the last time her mother said that. She wished for the day to come when she would have that mother back. The mother who nagged her but also gave her kisses before she left the house, and who told her constantly that she didn’t need a man to validate her worth.

Her mother was still alive, sitting in front of her, yet Harper felt that she was staring at a zombie. As the days progressed, Harper couldn’t help but wonder if she had lost her mother forever.

It was like any other Friday night, when underage kids raided some parentless household, sipping on cheap alcohol while auto-tuned songs that were overplayed on the radio blared through the speakers.

Harper stood by the beer kegs with a red-solo cup filled to the brim, shifting her weight from one foot to the other. Her best friend, Greyson, was standing in front of her saying something, something that must have been important considering the many hand gestures he used, but Harper didn’t hear a word, her focus elsewhere.

She blinked. “Sorry. What were you saying again?”

“Apparently nothing too important.” He tilted his head to the side, studying her features. “Where’s your mind at?”

“You’re allowed to continue living your life, Harper. There’s nothing you can do back at home.”

“I know but it’s just that…I’m all that she has. And what’s the point of me being here, anyway? I’m standing in the corner drinking cheap beer while watching people feel each other up, and for what? How is this fun?”

“You sound old,” Greyson scoffed, before throwing back the rest of his beer. “I’m going to get another drink. Do you want anything?”

She shook her head. “I think I’m going to go actually.”

“Um, yeah. I’m not really myself right now and I don’t want to bring you down, so you go ahead and have fun. Okay?”

He frowned. “One day you’re going to have to stick around for the entire party.”

Harper tucked her clutch under her arm. “Baby steps.”

Stripping her face of makeup, Harper climbed into bed. She usually read a book or listened to music before bed, feeling like she needed to keep her mind occupied elsewhere. She was an over thinker, which meant that one hour every night would be dedicated to tossing and turning.

But that night, just as she was reaching for her lamp switch, her eyes caught on the small doll she never paid much attention to anymore. It was the last bit of evidence of her childhood. The doll with chopped brown hair, because at five-years old Harper assumed that dolls’ hair grew back, wore a purple dress that fell to her ankles. Her eyelids were covered with purple ink; Harper’s attempt at applying makeup with a ballpoint pen.

Harper wasn’t great at doing makeup, even then.

She picked up the doll, setting it on her lap. Grazing her finger over the doll’s hair, a sad smile spread across Harper’s face. Nora had the same doll, although she had left hers in pristine condition. Both sisters used to spend hours playing with these dolls, pretending the dolls were twin sisters, just like Harper and Nora wished they were.

Back then Harper and Nora were each other’s best friends, but over the years something unspoken transpired causing them to grow apart. It was uncertain who was to blame; maybe they both were to some extent.

If Nora walked by Harper on the street one day, would she stop and say a friendly hello? Or would she walk past her? Harper wondered, and the thought of them actually being strangers to one another started to settle in.

Maybe if Harper knew of Nora’s plan she could have persuaded her to stay. Maybe if Harper stopped Nora then she would still have a sister who sat with her on her bed, both wrapped in blankets, while they talked about boys, friends, and whatever else sisters are supposed to talk about.

Truth was, she couldn’t have stopped Nora, even if she tried.

Nora was gone, her mother would forever be damaged because of it, and Harper would have to come to terms with being an only child.

Setting the doll back down on her side table, Harper tilted her head back against her tufted headboard and closed her eyes. 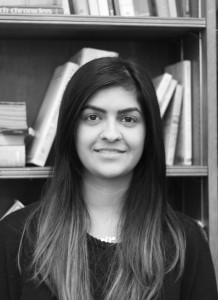 Maryam Azam is an Economics major and a member of Mount Holyoke College class of 2017. When she’s not drawing supply and demand curves, she spends her time writing stories that usually revolve around family dynamics or coming of age. Upon graduating, she hopes to explore the financial industry as well publish a Young Adult novel.

Maryam served as the Managing Editor for the Blackstick Review.