Like most of the mistakes Fran made in her life, Gracie happened in a barn. Fran’s own daddy’s run-down yellow barn, the one that’d been in the family since the war, was where she first tried reefer; she and her sister Mae got the giggles over nothing and then got so spooked by their own laughter Fran dropped her joint in a pile of hay and set the whole thing up in smoke (they both got out fine, but Mae had to draw her eyebrows on ever since). It was in Katie Turner’s barn that Fran let Katie and Mae hold her down against the cold mud floor and shove a rusty safety pin through her belly button, which came out so crooked and inflamed she’d had to wear one-pieces to the lake all summer long. And in Buddy Burgess’ great red mansion of a barn Fran, sixteen and sweet and ready to meet her destiny, let a boy put his hands on her for the first time.

Buddy’s pa owned half the butter supply in the state of Tennessee; Burgess Family Butter, finest this side of the Mississipp. Fran never did it to his face, but she and all of Rover Hill High used to call him Butter Boy and joke that he goes great with flapjacks and toast. He was an awkward, lanky boy who’d blossomed into a tall, chiseled center forward the summer before their sophomore year, and that plus his pa’s money had earned him a seat at the popular table. Fran snatched him up before he could become a notch in Katie’s belt (She’s like a doorknob, that girl, Mae liked to joke, everybody gets a turn) and that was that. Buddy and Fran became Lord and Lady Butter Boy.

On the night that made Gracie, Buddy took Fran to the cliff where he said he liked to do his thinking. He talked for a good hour about how he planned go to Brown, major in business, expand his pa’s company – butter was small potatoes – and Fran listened even though she didn’t care because she liked the way Buddy’s jaw worked when he talked; all muscle and sinew, as well crafted as a statue. When Buddy was through talking, Fran told him her dream was to be his girl forever, because she knew it’d make him happy, but it wasn’t true. When he heard it, though, he planted one on her like he was shipping off in the morning. Then he took her to the barn.

Grace Linda Meyers-Burgess was born a bastard with a few yellow splotches and a single patch of auburn hair smack in the middle of her forehead. Other than those minor imperfections, she was the most perfect thing Fran had ever laid eyes on. Gracie’s middle name was Linda because Fran’s great aunt was named Linda, and childless Aunt Linda had asked that her first grand-niece be named after her thirteen days before the day she died. Fran thought it a frumpy sort of name she would give her own kid, but that was when she was sure her two-years-older sister would start a family before she did.

Buddy held her shaking fist the whole time she was pushing – not her hand, her fist, because the moment Fran’s first contraction hit she clamped every muscle in her body and held like that until Grace was out. Buddy had gotten a look at her before Fran, scooped her gory little body right out of the nurse’s arms and just stared at her for minutes. Then, reluctantly, he handed her over to her mother.

Fran never imagined such a beautiful thing could exist as her Gracie, the fruit of her loins, her impeccable creation. The nurse, feeling grabby now, tried to take Grace back, said she needed to be cleaned and weighed and tested, but Fran kept asking for just one more minute. Eventually she, too, handed over her baby, and the moment it was just the two of them Buddy finally got down on one knee.

The new house – two stories high with big windows and brand new hardwood floors and one of those refrigerators that makes ice for you – smelled like cat piss, Fran complained. She held two-year-old Gracie’s head to her shoulder, shielding her baby’s fragile senses like the place might contaminate a child whose Momma wasn’t on guard. Grace sleepily accepted the embrace.

Buddy told her they’d just sleep on it, with that smooth southern-gentleman hitch in his voice that Fran knew by now meant the conversation was over. Then he snatched up Gracie, who quietly pouted and reached out for her Momma, and baby-talked, Who wants to see her new room, huh? Gracie does. Yes, she does.

Fran hated it when Buddy took Grace from her. She felt awkward and fidgety without her little girl in her arms. When Buddy had started going to work with his pa, Fran sat in the barn with Grace all day long, reading her alphabet books, then fairytales, then Harper’s Bazaar just to keep from losing it. She would sing Gracie anything that came to mind, from You Are My Sunshine to It’s the Hard Knock Life.

Fran liked to tell Grace about her old friends from school, her old Broadway dreams, and sometimes about her old Momma, Daddy and Mae. When she missed them she’d talk about the time Daddy threw out his back trying to climb in the girls’ playhouse to join their tea party, the time Momma let Fran ditch school to stay home and watch musicals together, all those times Mae took the fall for Fran’s foolishness. When she got too sad, too close to contrition, she talked about Daddy screaming when he got the slightest bit angry, screaming when she got pregnant that Gracie was her stupidest mistake yet; about Momma and Mae just sitting there with their heads bowed like a couple of torpid nuns. She reminded herself of the Burgesses and the barn. Gracie was the listener of her dreams.

Fran and Buddy finally started to worry around when Grace turned four. They hadn’t noticed it, four years and her own mother didn’t even notice; a fourteen-year-old nobody at a Piggly Wiggly’s had to point it out for them.

Buddy said he hated Piggly Wiggly’s because it was full of hicks, and Fran knew it was really because they didn’t sell Burgess butter, they had the brown bucket kind instead. But they were the only place in town that kept the checkout lines short, so Fran stopped in to get some milk and crackers for snack time. The checkout girl put on an eager grin and asked little pigtailed Gracie if she’d like a lollipop, stared at Grace staring at her for a painful eight seconds, and said to Fran, Jeez, does she never talk or what?

Fran, stumbling through indignant then confused then all too aware in a second, left the milk and crackers on the counter and dragged Grace and her own self out of the shop and into the car.

Fran and Buddy knew their child was quiet; she was shy, didn’t like to make small talk with folks. They’d said she was a late bloomer, nothing wrong with that, kids’ll talk when they talk. She remembered mommy and me classes from their Burgess barn days, the pride she felt when the other mommies gushed at how quiet and well behaved Grace was, the only baby that didn’t fuss, didn’t cry when the teacher picked her up.

Fran got home, put her child in her room and then went to her own to call Buddy at work and tell him they were shit parents with a broken kid.

Buddy didn’t want his baby girl going to a shrink, but he also didn’t want her to be a mute, so they compromised with a school-appointed counselor when Grace started first grade. The counselor had Fran wait outside while they met, because ‘a child might feel compelled to restrain themselves in the presence of a guardian,’ so Fran waited for him to close the door and then pressed her ear to it.

She heard the counselor’s voice in a question, a request, a couple tentative gestures. His was nasal and accent-less; she tried unconsciously to decode its origin. She’d been doing that lately, she noticed; analyzing voices, comparing timbers with lisps and vibratos with impediments. Buddy’s voice was soft but sly, naturally a bit calculating, like he was always saying something with his voice that didn’t fit in with his words.

Fran listened impatiently, shaking just a bit, for a little girl voice. Lately she’d been watching Gracie’s VHSs on her own, skipping through scenes of dancing puppets and cartoon dinosaurs and landing on scenes of children, all ages, just talking.

One of those nights, Buddy came home late from work, tired and frustrated, asked What’s that you’re watching? Where’s Gracie? and Fran didn’t answer, just kept hitting rewind-and-play over a scene of a tiny redhead wailing I want my mommy! before a laugh-track played in the background, a scene so integrally unfunny it had to let you know you were supposed to laugh. The child was about six years old, short with little auburn ringlets all down her back, and her voice was a heavenly, high-pitch squeal. 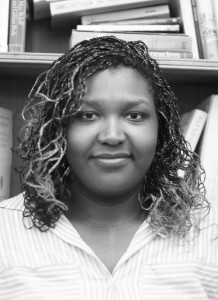 Naomi Oliver studies evolution and creative writing at Mount Holyoke College and will graduate with a degree in Biology and a minor in English. After graduation, she plans to continue writing, both professionally and for pleasure, in the hopes of one day becoming a regular science writer for The New York Times. In her spare time, Naomi enjoys crocheting gifts for her friends and family.

Naomi served as a Managing Editor for the 2016 Blackstick Review.