The wood stove at her back began to melt her boots. “Dammit!” Julianne hissed as she jumped away and grabbed at the now-pliable pleather. She kicked the boots off and they sailed the length of their dining room, crashing down on the maple floor of the den. Her legs didn’t feel scalded but she rubbed them for good measure as her eyes angrily welled up. “Of all the nights!” she yelled, more loudly than necessary. Their house was small, and Elaine was only in the kitchen checking the stuff in the oven.

Julianne stood still and waited for her wife to call back. Pitiable was she, getting hurt after preparing the dinner table so very well. She had even lugged the nice china up from the basement! Father and Mother came only once a year and Mother made it clear she appreciated a well put-together house and dinner party. Father would usually slide them two twenties as Mother put her coat on at the end of the night. Julianne hoped he would give them more this year since the price of mussels had gone up. “Hey, I’m in the kitchen, what happened?” Elaine finally yelled back.

“Oh wow, so sorry I wanted to heat the house? Is that too much to ask?”
Julianne’s jaw clenched. Who was Elaine to talk back to her like that? She could have melted her boot onto her calves! And after she had worked so hard to set the table just right. It was goddamn art. “Thank-you, El-aine.” The words bit the air, cutting through the sizzling of the kitchen and the deep whirring of their dining room’s vintage wood stove.

The doorbell brightly pealed. The company had come. Julianne padded over to her boots and pressed a thumb to the lining—they were cool enough on the inside, at least, and it was too late to change pairs. She sang “Come-ingg!” as she tugged the boots on and went for the door. “Mother, Father! I’m so glad you’re all finally here. How was the drive?” The screen door clanked against the door frame as the group moved indoors. Rogue flakes of snow crept in and settled on the carpet runner. Julianne spoke at a machine-gun pace. “So dinner should be almost ready and in the meantime I can take your coats. Mother, where did you get that brooch? Is it new? It’s fabulous. Oh, but don’t tell me that your coat is real. You know how bad the fur industry is.”

The guests chuckled. “Julianne” Mother started, “the first rule about being a hostess is being gracious, which you are, but right up there is the importance of letting your guests get a peep in. Yes?”

Julianne would have liked to take hold of Mother’s decorative silk scarf and tighten it. “I suppose one can be too friendly, then. How nice of you to take note.” Julianne tightened her mouth into a sort of smile and collected their winter wear. Mother and Father waited by the door as she scurried to put the coats in the guest bedroom. Did she hear her mother cluck behind her back? So it had begun. A bloom of red, the color of skin just slapped, darkened her cheeks.

She circled back and led them through the living room and into the dining room. Her anger bubbled as she thought about the observations Mother had to be making. Did she notice the dust that had settled into the corners and beneath leggy furniture? The tops of the walls and their sooty shade? At times like these Julianne pictured her mother with a cloud of gnats around her head. Each one a nitpick.

Father came alongside her and gave a playful hip-check. He smelled of wet wool and slightly lifted an eyebrow as if to say what can you do, huh? Julianne bumped him back and then took a deep breath. Let it go she chastised herself. It was the beginning of the dinner party. Too soon to call it scorched earth.

“Diane, Charlie, I’m in the kitchen. Be out soon!” Elaine popped her head into the doorway and smiled for good measure before retreating. From the dining room Julianne heard the characteristic pops of burners turning down low, and the scrapes of pots and pans maneuvered from the oven to stovetop.

Mother craned her neck in the direction of the kitchen. Her chin fat wobbled slightly from the strain. “Do tell me if you need help,” she said, with no intention of helping. “I’ve known that recipe by heart for years. I thought you’d be capable of the mussel recipe but…things happen, as we all know.”

Father chuckled. “Diane, remember that time we holed up at Martha’s and all we had to eat was mussels? Two whole days, girls. Took me a couple of years to start eating them again.” Father yanked his pants up at the mid-thigh and plopped into a dining room chair. A grin spread across his face and he closed his eyes sleepily. “Girls, this stove is wonderful. And I can tell you take good care of it. Makes me want to fall asleep like a cat in a sunbeam.”

Mother took a seat beside him. “Could you be a dear and fetch us whatever wine you’ve paired? Please and thank you.” Julianne made for the kitchen.

“She’s already started,” she rage-whispered at Elaine. “It’s the 90’s! When will she give up her act? I’m in my thirties and it’s the same snide bullshit every year. And to think we made mussels this time…for Pete’s sake.” Julianne gave her a quick peck on the cheek. “I’m sorry I snapped earlier. You know how I get,” she said before licking an errant ladle. Companionship was even more necessary when Mother came to town. The couple stuck serving spoons in the various dishes and began to ferry them to the table: mashed sweet potato, lemon asparagus with herbs, roasted carrots, dark rolls of bread, some salad concoction with pomegranate seeds. Finally the mussels made their entrance. Julianne smiled sweetly. “Look at all of this food. We have to eat it all tonight. No leftovers!”

Elaine chimed in, “I’ve had only yogurt today to prepare for this.”
“Now that’s not healthy, Elaine,” Mother chided as she doled out servings for her husband. “Losing weight requires more than a day.” Elaine awkwardly laughed.
“I’m not trying to lose weight. But that’s a different conversation.” She tore into a dinner roll and finished it in two bites. “So, um, tell me about work, Charlie. Do you like having new people at the office?”

“It’s going well I suppose. But anything beats work, am I right? Heh…Reggie and I are trying to figure out when we’ll be able to get out on the course this year. I know I’ll beat him this year.” Father gave a hefty squeeze on Mother’s upper arm and shook. “I feel it in my booones.” The dinner party, minus Mother, laughed heartily.

Julianne asked if the Jets had a chance at the Cup, which prompted a pleasant onset of sports jumbo. The young couple leaned back in their chairs a bit more. The aroma of mussels and wine and baked bread lulled the two women into a lazy stupor. With Father they discussed the merits of current television and shared laughs about easy sitcom references. Mother politely nodded. As time passed they began to add anecdotes about the past year together: their mishap at an apparently nude beach, the snowstorm that they lost their shovels in, the neighbors’ awkward conversations they were privy to before leaving their apartment. Did Julianne see a slight smile tug at Mother’s lips a few times?

As the night wound down plates were switched out for heavy-handled clay mugs. “Mother, what tea would you like? We have a variety.” Julianne rummaged through a cabinet and Elaine went to the kitchen to put on the kettle.

Mother waited to reply. She seemed caught up in her own thoughts. “Well…bring the collection then. I’d like to know my options.” Her tone was surprisingly mellow. Father thanked them but no, he was fine without anything more. With a soft clink Julianne laid the ceramic box in front of her mother.

It was a peaceful milk-white with shades of indigo to decorate; the lid had been printed with an etching of some exotic colony’s port that surely dealt in the spice trade. Delicate lines separated strong sails from the smudgy waters they were to traipse through en route to the heart of the Empire. Circling the box’s sides was a gently stippled band of shaded leaves and flowers. The design belonged on a heavy brocade ribbon. Mother put her wrinkled fingers atop the specimen. Her hand did not move; her expression remained pointed at the tea holder before her. “You…you know I haven’t been easy on you, Julianne.” She glanced up for a moment but then flicked downward again. “I wanted to say that your home is actually quite lovely. In its own way.” She drew the lid, looked in on the contents, pinched a brightly colored sachet. “And Elaine cooks properly. You should take a few notes.” Mother dropped the tea bag into the mug smoothed the string against the outside with a forefinger. “You chose well.”

Julianne and Father waited to see if she was done, which she was. Neither knew what to say and continued to look at the dishes scattered across the table. The muffled blow of the woodstove continued and was interspersed by clanks from Elaine’s goings-on in the kitchen. As Julianne started to open her mouth, Elaine breezed into the dining room with the steaming kettle. “All ready. Who would like water?” Elaine caught Julianne’s slack mouth and averted gaze. “Did I interrupt?”


With that, Julianne got up from her chair and gently kissed her on the cheek. “No, not at all. We were just waiting for you. We’ve been waiting for you for a long time.” A smiling Elaine scrunched her eyebrows in confusion and took a seat next to her partner. Julianne softly rubbed her wife’s knee as Elaine poured the water for Mother. 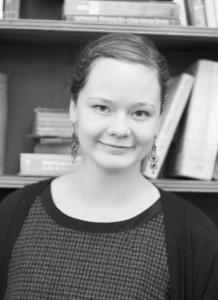 En la Universidad de Mount Holyoke Señorita McLeavy sigue una carrera en los estudios hispanohablantes. Tiene gran interés en enseñar el inglés comunicativo a estudiantes de cualquier edad, and for that wants to pursue a profession in English for Speakers of Other Languages after graduation. Her minor in English mainly comprises creative writing courses in which she has to finish her thoughts and sentences on paper. It is in her spare time that she must deal with her love and annoyance for Ian McEwan.

Jill was an Art Editor for the 2016 Blackstick Review.