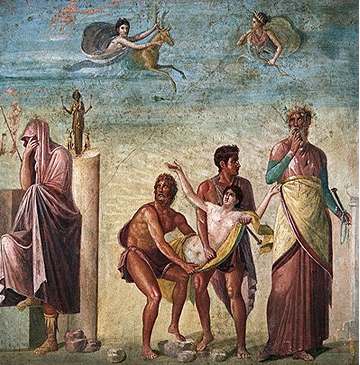 “Nereus continued boisterous over the waves; he would not carry the war across the sea, and there were people who thought that Neptune, who had built the walls of Troy, was therefore bound to spare the city. Calchas knew better, and said so: virgin blood must satisfy the virgin goddess’ anger. The common cause was stronger than affection, the king subdued the father; Agamemnon led Iphigenia to the solemn altar, and while she stood there, ready for the offering of her chaste blood, and even the priests were weeping, Diana yielded, veiled their eyes with cloud, and even while the rites went on, confused with darkness and the cries of people praying, Iphigenia was taken, and a deer left in her place as victim, so the goddess was satisfied; her anger and the ocean’s subsided, and the thousand ships responded to the fresh winds astern and, with much trouble, came to the Phrygian shores.” 1

This scene from Ovid’s Metamorphoses takes place before the Trojan War. While the Greeks were preparing for their journey, Agamemnon’s men offended Diana by killing her most sacred deer. Diana was furious and demanded retribution. Until she was appeased, she ceased the winds from blowing, preventing Agamemnon’s navy from setting sail to Troy. Diana demanded a virgin sacrifice of the Greeks, and it was Iphigenia, Agamemnon’s daughter, who was chosen. As the poem explains, Diana replaces Iphigenia with a deer, saving her life.

According to other versions of the story, no one realized that this switch had occurred, and Iphigenia’s mother Clytemnestra was so upset at her husband Agamemnon for allowing their daughter’s murder that she had him killed. Then, Clytemnestra’s son Orestes avenged his father’s murder by killing his own mother before fleeing Greece as a fugitive.

According to the cult of Diana at Aricia’s version of the story, after these disturbing events occurred, Iphigenia and her brother Orestes traveled to Tauris in modern day Crimea where they stole Diana’s cult image from a temple and then fled to Italy to escape punishment. Once in Aricia, Orestes established the Arician cult of Diana and founded the rite of the rex nemorensis 2.

Diana’s transition from east to west with the assistance of the fugitives Iphigenia and Orestes set the tone for her identity as a goddess of metamorphosis.