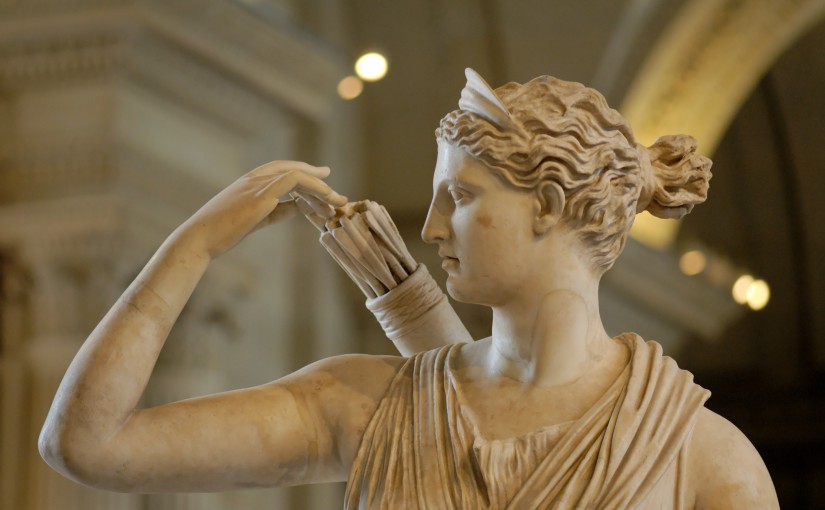 While Diana is a triple-form deity, she was predominantly a hunting and moon goddess. The hunting aspect, however, was favored among her worshippers 1 and even today remains her most iconic form. However, a certain amount of respect for nature comes with being a hunting goddess. Not only did men and women worship her in hopes of a successful hunt, but Diana was also the goddess of wild animals. These aspects can be seen in ancient representations of Diana as Huntress. Wearing a short chiton (tunic) for agility, she is often shown in the midst of the hunt, deer at her side or dog at her feet, reaching over her shoulder to pull an arrow from her quiver or drawing back her loaded bow with game in sight.

This aspect of Diana is closely associated with her ancient Greek counterpart, Artemis, patroness and protector of virgins. While Diana was originally a Latin goddess worshipped in Aricia, a rival city of Rome, she naturally aligned with Artemis’s identity as a virgin huntress. As early as the sixth century BCE, the Latins appropriated visual representations of Artemis for their own hunting goddess2. By 399 BCE, this Artemis-Diana type was fully accepted in Rome where she became known as the twin sister of Apollo and the daughter of Latona, the Roman equivalent of Leto2. Essentially, Roman Diana is the integration of Greek iconography with a Latin goddess. She first appears in Ovid’s Metamorphoses as the virgin goddess of the hunt:

“Diana, tired with hunting, warm with the burning sun, found a cool grove where a stream went murmuring over the smooth sands. She praised the place, she dipped her feet in the water, how pleasant it was! She called to her companions, ‘No one can see us here: let us jump in, naked!’ They all obeyed, undressed, except one girl, who could not seem to hurry, so the others stripped her and saw the truth. She stood in terror trying to move her hands to hide her belly. ‘Be off!’ Diana cried, ‘This pool is holy, do not pollute it!’ And the girl was banished.” 4

After the Latin revolt of 338 BCE, Aricia became a Roman city and its people were granted full Roman citizenship 5. This was not the case for all Latin cities. While the reason for this is unknown, the only cults of Diana were at Aricia and on the Aventine in Rome 6. Despite their ongoing rivalry, Aricia and Rome were bound together by their mutual respect and worship of Diana, Goddess of the Hunt. Diana not only became the symbol of leadership for the Latins, but as a goddess who granted it 7.