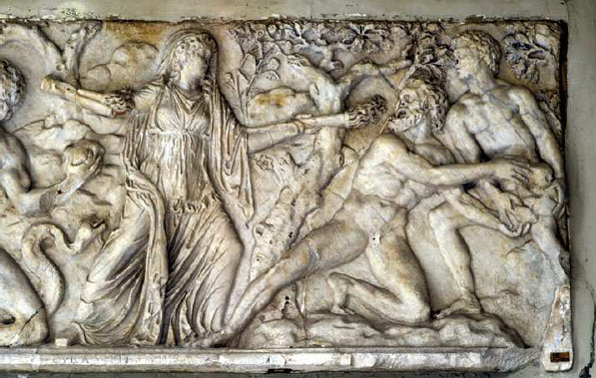 The name Hecate was used as a name for Diana in the underworld. She was the goddess of the night and of necromancy, accompanied by her baying hounds of hell. Witches called upon her in times of need, such as Medea when her husband Jason asked her to cast a spell to add years to his father’s life:

“That is a wicked thing to ask, my husband. I can not do it, and I would not do it, even if I could, give any one else a portion of Jason’s life; it is wrong of you to ask me, and Hecate would never allow it, never. But I will try to give you something better, greater, than you have asked for. By my art, not by subtraction of your years, I will try to add days to your father’s life, if only Hecate will stand by me.” 1.

“She was a goddess of change, of the decay that must proceed renewal, of life, and of death” 2. However, Hecate is typically shown in the triple form of Diana in order to assure her worshippers that she was more than just a bringer of death. This can be seen in sculpture, wall frescoes, and numismatics, oftentimes holding two torches. This was the preferable representation of Diana at Aricia, which can be seen in a denarius minted in 43 BCE by an Arician moneyer, P. Accoleius Lariscolus.

The obverse of the coin shows a bust of Diana with an unusual hairstyle that may be a representation of what the sanctuary’s cult statue would have looked like. On the reverse is the sanctuary’s triple Diana: three goddesses, one holding a bow, another holding a poppy flower, stand linked together with cypress trees rising behind them 3. According to Green, this coin stresses the archaic and wild aspect of the goddess that can also be seen in her identity as Diana Nemorensis 4.