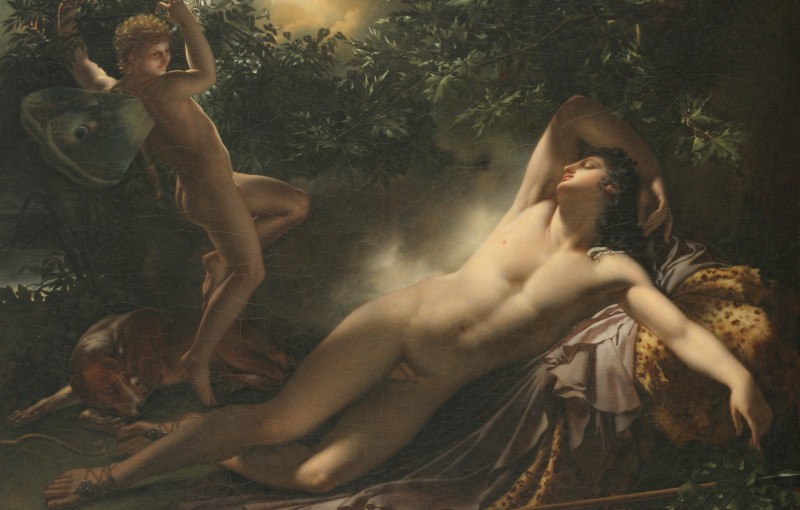 The 18th century painting shown above by Anne-Louis Girodet (French; 1791, oil on canvas, Musee du Louvre, Paris) tells the mythological story of Selene and Endymion. Only fragmentary remnants of this myth exist and so each version reveals something different about the story of Selene the moon and Endymion the sleeping shepherd. According to some versions, Endymion is given a gift of eternal sleep as his form of death and Cupid shoots his arrows at the Moon to make her fall in love with him. According to others, the moon goddess is who grants him eternal slumber so she may love him forever.

Girodet’s The Sleep of Endymion shows the moment that Cupid parts the trees so the Moon may shine her light down upon her sleeping lover’s face. The artist chose to represent Selene as the moon itself, but in ancient Roman depictions, Selene is a personification of the moon.

In a Roman floor mosaic from the third century CE, the scene focuses on the moment when Selene falls in love with the young mortal shepherd. Cupid, in the upper right corner, points down at Endymion as if guiding Selene’s gaze towards him. Selene steps out of her bull-drawn biga that she uses to pull the moon across the sky each night, and raises a lit torch that illuminates Endymion’s face in the darkness. She peers down at him longingly. Endymion is fast asleep and unaware of her presence. His head rests on his left arm and he holds a shepherd’s crook in his right.

On the Endymion sarcophagus at the Metropolitan Museum of Art, the same tale is told yet in high relief and as a continuous narrative. In the center adorned with a moon diadem, Selene visits her lover Endymion who lies amidst a bucolic landscape. On the left corner of the sarcophagus, Helios, the sun god, is shown riding his chariot towards Selene and her lover while on the right, Selene too appears in her chariot, yet riding away as the sun closes in on them. The transition of rising sun and setting moon leaves Selene waiting until the next night when she can visit her lover again. Because this scene appears on a sarcophagus, it therefore features allegorical associations. On sarcophagi, sleep is often a symbol of the afterlife 1. The sleeping Endymion is either sending a message about the eternal youth that comes with dying young or it is referencing the peaceful and pastoral afterlife that awaits the deceased as told in Theocritus’s Idylls 2.