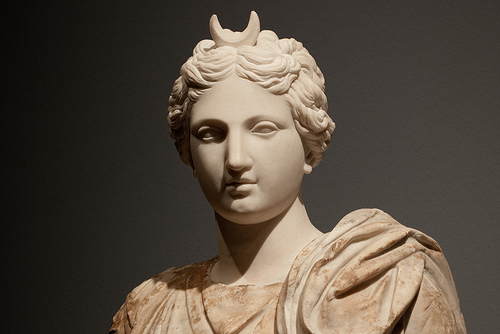 While Diana is a triple goddess with many aspects, her connection to the moon is possibly more important to her identity than her huntress aspect. In Latin, her name means “goddess of light and of the moon.” It stems from the words for “shining,” “divine,” “the open sky,” and dies or “daylight.” This may seem contradictive for a goddess of the night and the underworld, but as Cicero explains, “she was called Diana because she made it like day during the night” 1. Diana was not only a moon goddess; she was worshipped as the moon 2. She was the moon. Ovid portrays her as such in his Metamorphoses, often using the word “moon” in place of her name.

In Ovid’s Story of Phaethon, the Sun, father of Phaethon, is presumably Apollo. He is referred to later on as Phoebus, which is one of Apollo’s many names. Apollo is the Sun and Diana, his sister, is the Moon. In the story, Phaeton begs his father to let him drive his chariot, which Apollo does each day to move the sun across the sky. The Sun agrees to his son’s request, and it ends in horror with Phaethon and much of the earth catching fire:

“The Moon, in wonder, watches her brother’s horses running lower than her own steeds. The scorched clouds smoke. The mountains of earth catch fire, the prairies crack, the rivers dry up, the meadows are white-hot, the trees, the leaves burn to a crisp, the crops are tinder.” 3

Diana’s identity as the Moon plays a crucial role in connecting her other aspects as huntress and underworld goddess. The moon was an essential element of a successful hunt. The ancients believed that the moon provided the earth with dew at night, and this dew, or moisture, is what allows the scent of woodland animals to be picked up by hunting dogs. The moisture had to be just right; too much or too little and the scent would be too hard to track 4.

The ancients saw the monthly phases of the moon as a metaphorical death; a time when Diana, the Moon, would journey to the underworld 5. Because of the effect the moon’s waxing and waning had on the ocean’s tide, it was thought that she was who gave life and took it away 6.

“The shield of the god reddens at early morning, reddens at evening, but is white at noonday in purer air, farther from earth’s contagion. And the Moon-goddess changes in the nighttime, lesser today than yesterday, if waning, greater tomorrow than today, when crescent.” 7

The phases of the moon as it changes from new to full each month are representative of Diana’s transitory nature at the core of her identity. She transitioned the light to darkness and life to death.